As a medical intern, I assisted a vascular surgeon in all her surgeries for a month. I did some research on medical topics to write about and discovered there is not much on the statistics of vascular events in many African countries and no essential data was actually found. This could mean that such patients may actually not be living long enough to the extent where these vascular emergencies can be recognised in the medical facilities.

The predisposing factors of Peripheral Vascular Injuries may include diabetes, smoking, old age e.t.c. With an understanding of its pathology, it can be concluded that any patient with the above clinical history beyond 10 years is more than likely to end up with any of the peripheral vascular injuries if not well controlled.

These peripheral vascular injuries can include:

In this article, I am going to discuss the important things you need to know about acute limb ischaemia. This should help you in the early identification of this condition to seek medical attention early enough to save the affected limb.

What is Acute Limb Ischaemia?

In patients with acute limb ischaemia, there is a decrease in oxygenated blood flow to the lower limbs. This in turn, puts the limb in question at risk of loss of function, and in the worst case, amputation.

The decrease in blood flow is mostly caused by an occlusion in the arteries that results in a decrease in the velocity of saturated blood flow to the lower limbs. This puts the limb at risk of necrosis due to reduced blood supply to the limb tissues.

There is also a decrease in the richness of collateral circulation based on the location and progression of the thrombus (blood clot) in the arterial tree of the limb.

Let’s talk briefly about the anatomy of the irrigation system of the lower limb.

The inferior aortic artery carries blood from the left ventricle down to the lower segments of the body. This aorta descends into the abdomen, where it is referred to as the abdominal aorta.

It continues downward and bifurcates into two iliac arteries (right and left). These then runs through the iliac region down to the lower limbs. As each blood vessel runs down the limb they adapt to the names of bones and position in which they pass through as labelled in the image.

Acute Limb Ischaemia can affect both males and females. It is more common in individuals above 45 years of age (old age actually increase the risk factor).

Persons who are most at risk of suffering limb ischaemia include:

There are two principal mechanism in which arteries of the lower limb can be obstructed, causing a reduction of blood flow. They are as follows:

In a healthy individual, blood travels smoothly through thousands of miles to deliver oxygen, nutrients and hormones to every tissue in our body system.

At the same time, they also remove waste products from these organs and tissues and deliver them to either the liver or kidneys for excretion.

But as time goes on, certain injuries can impede these functions. In addition, most of our diets and daily habits can put our blood vessels at risk.

When we consume too much fatty foods and do less exercises, the fatty foods we eat can be stored in our blood vessels (arteries) in form of cholesterol.

The accumulation of cholesterol in our vessels forms an atheroma plaque, which in turn can limit or totally obstruct the flow of blood to a particular region.

Thrombosis in situ is formed when there is an atheroma plaque that inhibits the free flow of blood to the lower limb. An obstruction caused by a thrombos is more frequently seen in patients who have a history of Chronic Arterial Ischaemia.

Embolisation is a very common cause of Peripheral Ischaemia. An embolus refers to a ruptured thrombus which had traveled from a proximal source to occlude the irrigation system distally.

The most common cause of embolisation is Auricular Fibrillation. Other causes include Myocardial Infarction and Aortic Aneurysm. Thrombus are often located in the bifurcation of principal arteries as a result of the reduced arterial calibre in such positions, principally in the Femoral Arteries (the most frequent).

What Are The symptoms of Acute Limb Ischaemia? 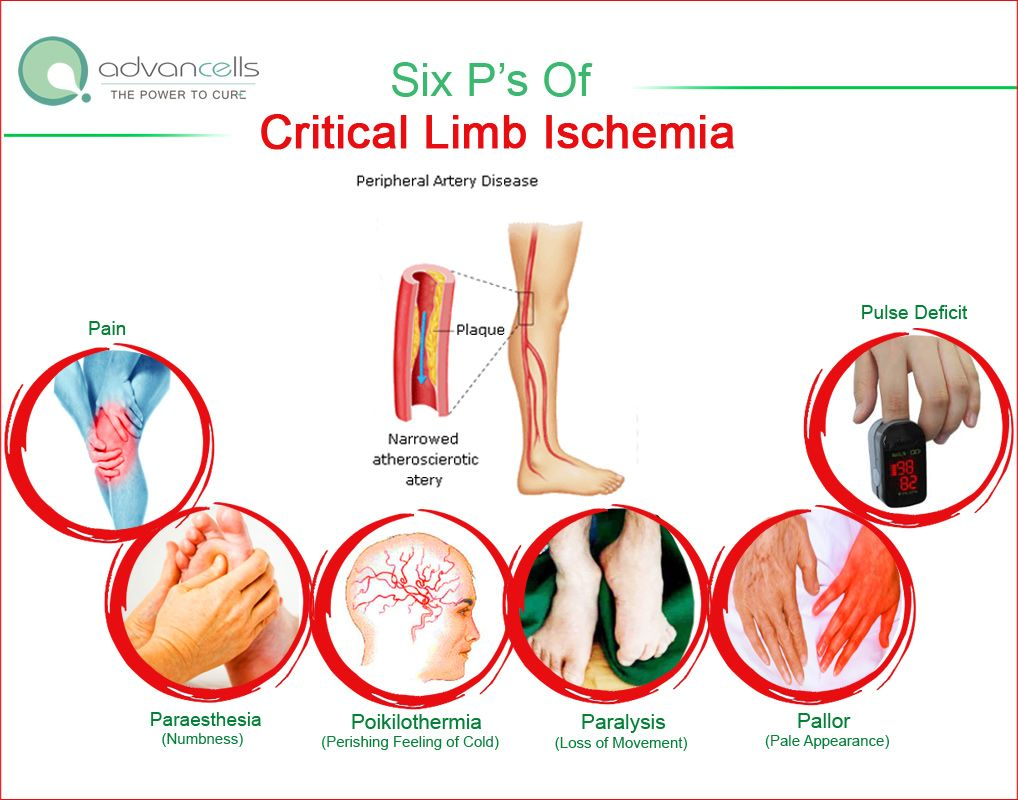 The clinical features of acute limb ischemia is useful to all medical practitioners and makes it easier to diagnose. Doctors use the Mnemonic “6P’s of ischaemia”, which covers all the symptoms and at the same time, classify the urgency of such case.

These 6 symptoms make it easy for doctors to detect a case of a peripheral ischaemia. Early diagnosis and handling of the condition increases the chances of saving the patient’s limb.

Among all these signs, the most important of them all to establish the diagnosis of acute limb ischaemia is the absence of pulse (pulselessness). When there is pain, it is usually acute and present in the majority of patients.

Paralysis and paresthesia are both the most important signs to evaluate the gravity of the ischaemia. When there is paralysis of any limb, there is no longer a way to save the function of that limb and what follows after is amputation.

Clinical symptoms always starts with a slight pain around the limb in which blood flow has been restricted. However, the pain increases gradually.

After this follows a discoloration of the skin referred to in its medical term as Pallor. You can observe this in the exact region in which you feel the pain. It presents as an unhealthy pale appearance and you can also feel a little bit of cold around that region. At this point, it is best to visit your doctor to properly ascertain the cause of your discomfort and symptoms.

In most cases, patients stop feeling pain and then they decide to stay at home because everything now seems fine to them. The pain stops because after a certain period of time of restriction of blood flow, the sensory nerves in such area which are responsible for sending pain signals to our brain dies off, leaving the patient with no sensory response and thus will not feel the pain anymore or in some other cases blood flow is regain, and it is important to know that it wont last for a long period of time if the underlined cause is not tackled.

But this does not mean the problem is cured. That is why it is important to see a medical professional right from the onset of pain. If the actually diagnosis is Acute Peripheral Ischaemia, the doctor has a limited amount of time, just between a space of 6 hours to save that limb. If nothing is done, complications may occur which could lead to amputation of the limb or possible death.

Doctors use the symptoms mentioned above to ascertain whether a patient may be suffering from an ischaemia. When peripheral ischaemia is suspected in patients who are known to have risk factors, a Doppler Ultrasound Scan and CT angiography is needed to confirm the diagnosis.

The doctor will commence treatment immediately to save the patient’s limb as soon as the peripheral ischaemia has been confirmed.

Blood clots are responsible for acute limb ischaemia. It is therefore critical to start treatment with anticoagulant drug such as intravenous Heparin. Only a medical practitioner can calculate the actual dose needed by a patient.

The doctor will place the affected limb in a resting and slightly declining position. A surgical intervention called embolectomy using a fogarty catheter is the only effective treatment to prevent further progression. This happens in some cases where the ischaemia is serious with the possibility of losing a limb.